skip to main | skip to sidebar
Reviews Downloads Opinions/Articles Blog News Web Advices
Wha ah gwaan? Im Krikon and this is my blog, it's dedicated to everything i find interesting, esp. Reggae but also movies and graphic design. My reviews feature some low-quality, streaming samples but im not an illegal mp3 blog and will never be. Any artist or label who want their samples removed, let me know. If you want your album or movie reviewed here, post in the chat box and i'll get in touch with you. 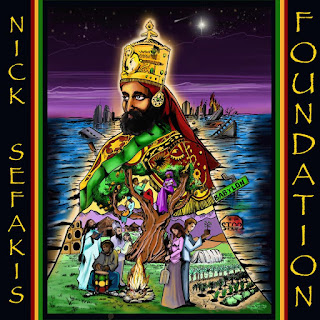 I have criticized the Cali Reggae scene more than once, on my FB profile, in groups and forums. It's safe to say that im not a fan of the entitled stoner college boys who make up the scene. so with that in mind, why would i choose to re-launch my once slumbering blog with an review of a Cali album? Well, good music is good music no matter where it comes from or who is making it, i wont discriminate against a good album.

Nick Sefakis is not an artist im familiar with, he is part of the popular group "Iya Terra" which is a much more Rockers oriented group while Nick's sound has more of an traditional roots vibe. His name kept on popping up in my Facebook flow and im glad i finally decided to check him out. No matter how much of an vinyl snob i may be, "Spotify" is very convenient.

First thing that hits you is the striking drawing of Haile Selassie I that graces the cover, it's made by New Mexico's own Ras Elijah TafarI (im based in Roswell,NM) and sets the tone perfectly before you even have the time to listen to the first tune, forget the slackness, this will be a conscious, spiritual affair from the beginning to the start.

It start with the title track, "Foundation" a modern and upbeat tune about how you gotta have a strong foundation and not build your house on quicksand (this is obviously a metaphor) and how us Rasta's are peaceful and will not change no matter what. I have to admit that Nick Sefakis voice is very pleasant and soothing all while being perfect for the serious subjects of this album. "Young dread" is another stand out song, slightly more melancholic but still energetic and with an driving energy.

Im a firm believer in balance, you can be as conscious and Rasta as you want to be but it's still a good idea to lighten up every once in a while. Do a love song, something humorous or a story driven track about something related to everyday life, it wont make you less righteous. On this album this come in the form of "Keep on loving you" , an organ driven lovers tune where he sings in falsetto. It's absolutely awesome and is despite the lighter subject matter every bit as great as the other songs on here.

Another great song would be the melodica flavored "Ring out a chant" which most definitely is a return to the more spiritual tunes which dominate this album. It has an incredible meditative and fragile quality to it, a little bit like the vibes you would hear on a "Ijahman Levi" album. Last up is "Truly" which has an slightly R&B, cross-over, urban feel to it all while still staying true to the conscious theme of the album. If this is the future of the Reggae cross-over tune im comfortable with the direction it's taking.

To sum things up i must say this is a very impressive album, the lyrics are absolutely amazing and really makes you think and the accompanying music is timeless and flawlessly performed. It's a very deep and serious album with an strong meditative vibe to it. If you are looking for something to get the party started this is not the album and i don't see this ever becoming a soundsystem favorite. With that being said, it's an amazing album well suited for deep contemplation and meditation.
Posted by Krikon at 11:50 PM

Other Blogs or sites of Interest